Update: You may have noticed this post is a little old! We’ve replaced the Feedback Tab with something even better: Web Widget.

So are you an app developer for one of these platforms and do you want to make sure that your customers can always submit feedback or support requests directly to you from within your application, you can now embed a mobile feedback tab in your application. All customer requests are being piped directly to your Zendesk ensuring that your customers get the service transparency they expect and you as a developer gets professional-grade workflow to properly deal with customer service and support.

The talented people at jTribe and Headnix are already embedding the mobile feedback tab in their popular apps, and you can too by downloading the code libraries directly from Zendesk’s GitHub repository. Both the Cocoa library for iOS and Java library for Android are available and we’ve open sourced it so that you can extend and customize it to your needs exactly.

Full press release below the fold. 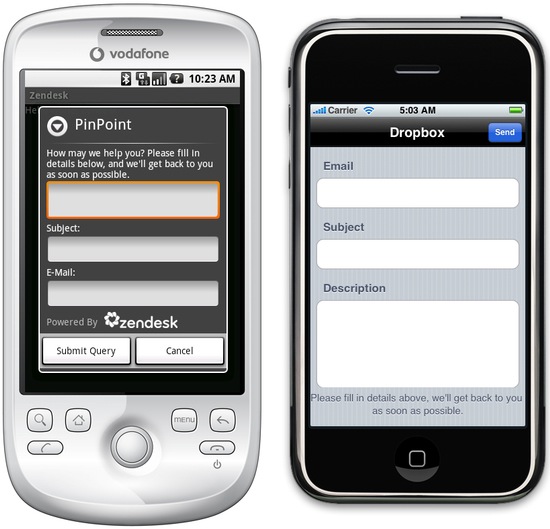 iPhone and Android Users Can
Now Get the Help They Need

Boston, MA, June 18, 2009  Thanks to Zendesk, The pioneer in transcendent, online help-desk solutions, iPhone and Android application developers now have the ability to embed a mobile dropbox in their applications integrated directly to Zendesks professional grade help desk backend. With this dropbox in place, iPhone and Android users can easily and quickly submit a bug report, feature request, question or service request directly to the developer without having to leave the application

Apple reports nearly 50,000 applications available in their store and four million application downloads a day, demonstrating the need for a feature that allows users to connect with developers. To bring this functionality to developers, Zendesk developed and published the source code and documentation enabling developers to extend and modify the dropbox behavior to their own requirements and needs.

The jTribe GPS aps are popular tools for folk who enjoy real-time trip tracking, said jTribe Director Daniel Bradby. With more than 3 million geo locations stored in our database and 30,000 application users, we occasionally encounter difficulty accessing information and providing it to the user. Zendesk gives our users the ability to interact with us and the confidence that we can help them with any jTribe issue they have.

Support drop boxes are a ubiquitous feature on the web where users see them labeled as feedback, support or even help, providing an easy way for visitors to interact with the site owner. However, until now, mobile application users have not been able to enjoy the same convenience and access on their devices as they have online. In the past if a user was playing a game, for example, and it crashed, the user had to move out of the up, open a browser and try to find the developer online. Now the user can send a note the moment the game locks up.

Headnix relies on Zendesk for all of our service needs, said Headnix Founder Bill So. All support for our application, which turns any iPhone, iPod Touch, or Mac or PC desktop into a Chinese writing tablet, is managed through Zendesk. Whether our users contact us via email through our site, post a question in our forums, or send a note through their mobile devices, we have clear visibility into each and every issue, and can manage them appropriately to maintain customer satisfaction.

One of the big reasons why we all love our iPhones and G1s are the fantastic aps on them, said Mikkel Svane, CEO of Zendesk. But lets face it, if one locks up or doesnt work right and the user cant tell anyone about it, it is abandoned for the next best that distracts us. For developers, this is not a comforting thought as they vie to attract users. With our application, developers dont have to worry that a bug they arent aware of will prevent their application from spreading. Users can easily contact the developer from their device giving the developer instant and actionable visibility into a potential issue.

Zendesk is inspiring the help desk 2.0 movement through a focus on enlightened customer support. As the first organization in the industry to leverage SaaS and the benefits of web-based communication and social media, Zendesk provides the only professional-grade on-demand help desk. Combining the convenience of the web and agile support, Zendesk extends good help desk karma to any company, large or small, looking to offer beautifully simple online support that is flexible, rich and intuitive.

Backed by Charles River Ventures, Zendesk was founded in 2007 and has more than 1,000 customers including Books-A-Million, IDEO, John Lewis, MSNBC, The Rackspace Cloud and Twitter. To learn more, go to www.zendesk.com or follow @zendesk on Twitter.

Use your IoT data to create a better customer experience